Nicole for Congress In the News

This was a ‘significant win’ for House in NY: GOP representative →
Fox Business – November 10th, 2022

New Yorkers need to protect cops — and themselves — by ousting Hochul & Co. this November →
Op-Ed by Nicole Malliotakis – September 23rd, 2022

Here’s what Republicans will deliver when we take back the House →
New York Post – September 23rd, 2022

‘Sick And Tired Of The Democrats Running Our Country Into the Ground’: Malliotakis Slams Dems →
Forbes – August 24th, 2022

An empty chair sits in Congresswoman Malliotakis’ office to remind us of all who went to war, but never came home →
Staten Island Advance – June 16th, 2022

Malliotakis: People have had enough of the government overreach during the pandemic →
Fox News – December 27th, 2021

New bill would ban BLM, other ‘political flags’ from flying at US embassies →
New York Post – May 29th, 2021

After record-breaking victories, this is what newly elected GOP women had to say about the future of their party →
CNN – November 29th, 2020

Congresswoman-Elect Malliotakis on How to Bring New Yorkers Back →
Townhall – November 16th, 2020

Nicole Malliotakis has The Squad in her sights as new face of GOP →
New York Post – November 14th, 2020

Welcome to West Brighton, the Staten Island Neighborhood that Could Decide the Rose-Malliotakis House Race →
The City – October 28th, 2020

In New York City, The GOP Makes A Stand For Law And Order →
The Federalist – September 20th, 2020

Listen to the docs — resume elective surgery →
Op-Ed by Nicole Malliotakis – May 24th, 2020

A politician, a teen and some Kiwanians walked up to a pantry to stage a drive-by-food-drive. Another success. →
Staten Island Advance – May 15th, 2020

Put All Home Contract and Associated Trades Back to Work →
Op-Ed by Nicole Malliotakis – May 15th, 2020

Loved ones pack into the Island’s cemeteries as gates open up for Mother’s Day →
Staten Island Advance – May 10th, 2020

Nicole Malliotakis: ‘This Is a Time for Our Country to Come Together’ →
Breitbart – February 21st, 2020

Malliotakis tapped by state assembly minority to lead efforts to restore access to all DMV records including those of undocumented immigrants →
Staten Island Advance – February 25th, 2020

Malliotakis now has GOP support from both sides of congressional district as race against Max Rose heats up →
Staten Island Advance – January 10th, 2020

Malliotakis: Mother Cabrini got the votes — but not the statue. Why? →
Op-Ed by Nicole Malliotakis – October 10th, 2019

NRCC Announces 43 “On the Radar” Candidates in First Round of Young Guns Program →
NRCC – August 16th, 2019

Malliotakis urges Max Rose to call for Ilhan Omar’s resignation from House committee after her remarks on Venezuela →
Staten Island Advance – May 3rd, 2019

Fundraiser for Nicole Malliotakis for Congress at the Russian Tea Room →
The National Herald – March 24th, 2019 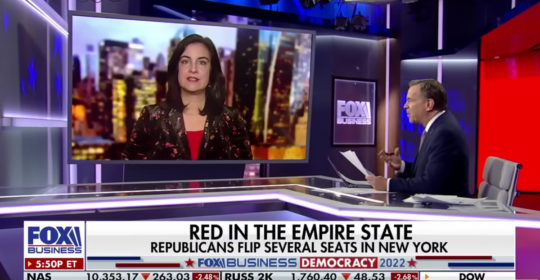 Malliotakis: This was a ‘significant win’ for House in NY

Malliotakis: NY parole board’s release of 34 cop killers & other murderers is a disgrace As we mark the 48th Anniversary of Turkey’s illegal invasion and occupation of Cyprus, our allies in the Mediterranean face new threats by Erdogan. Malliotakis: Biden’s Policy Should Be to Produce American Oil Not Beg for Saudi Oil

You don’t need to travel 11,000 miles and fist bump the Saudis. You can visit oil and natural gas producing states right here in the USA! Congresswoman Nicole Malliotakis appeared on Fox News to discuss the state of the economy and its effect on Americans. Malliotakis: Woke DA Bragg has it backwards; Bodega worker acted in self defense. On Stephen Colbert’s show, AOC once again took a page out of the Hugo Chavez socialist playbook and called for packing the Supreme Court.